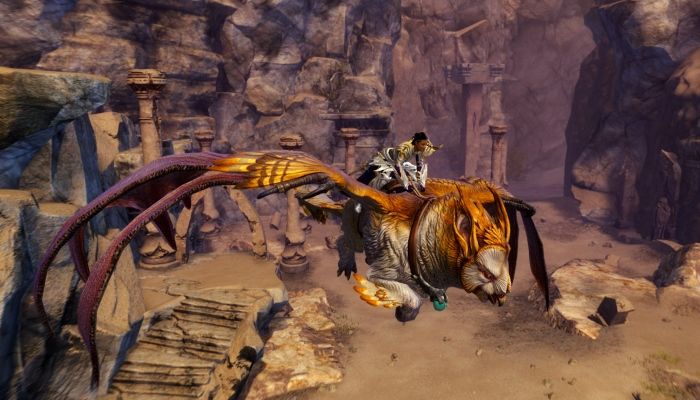 Another trip in Guild Wars 2 to get the Griffon mount is going around the desolation map. Here, your main objective is similar to the previous one. You need to collect eight relics (items and griffin eggs) spread on the map. Here is the guide of the item locations.

1. Ashhe, The Rune Of Valor

You need to complete an event at the Darkland Waypoint from Redeemer Kossan NPC. It is a patrol event, which you can do with a friend.

Close to the area, you can get the Mottled Canyon Egg. It is located at the eastern part of the Ruination at the very top of a ledge. You can use a springer or griffon to reach the spot.

3. Virzak, The Runs Of Compassion

It is easier to jump the wall right beside the Darkland Waypoint to reach the shrine. Use the help of a sunspear ghost, so you can go higher to the ledges. ( The Desolation Guide – Griffon Mount Guild Wars 2 )

Go to the Lair of the Forgotten waypoint after completing the heart and buy it from Dunkoro for 25 gold.

Buy the item from Kisha near Bonestrand waypoint.

Follow the path from the Scourgeway waypoint. Use a springer to climb up ledges on the left side to reach the top with griffon roost. ( The Desolation Guide – Griffon Mount Guild Wars 2 )

Go gliding with the griffon from the previous Warmed egg griffon roost. You can glide down to a circular stone construction at Scourgeway.

Go back to the roost and fly up to the last place at the Scourgeway. The egg is a bit northwest of the area on top of a towering stone.

Get tired with collecting items and go around maps? That is the challenge of GW2’s hidden achievements. In this case, you are almost there. Just another one collection before moving on to a different collection.

But if you have enough and have no time to continue, consider checking out MMOPilot. We got several options and services for game boost to help you advance in the game. Check our site and see what we can give to you!

View all posts by Kukuh →